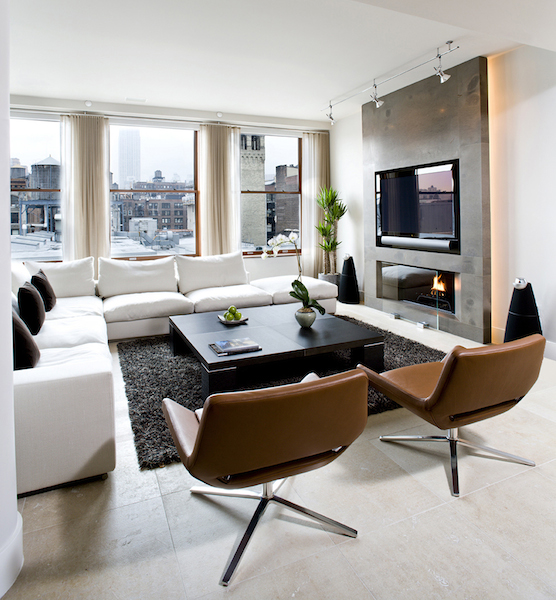 In my practice, I have always tried to give each individual client the right amount of attention, and the peace of mind that each seeks. One occurrence especially enlightened me to a new perspective, through a special client. When it comes to collaborating with a couple on designing, often there is one person who is speaking just a little more, who is maybe getting the most attention to wants and needs.

One day, a new client called me and he was a man recently divorced. He had already purchased a beautiful duplex apartment that was designed by a famous architect in the 1960s and that had been untouched ever since.

He was referred by another client who knew he would appreciate my minimalist approach and streamlined and functional design, and this was a very good match for all.  At the time, my client was planning on living as a single man. He desired specific elements in the home: a very large spa-like bathroom with a steam shower and sauna, a large walk-in closet, a powerful media room, bedroom with sitting area, a large open kitchen with an island, and a living room that included a bar area.

During the design phase of his apartment, however, he met and fell in love with the woman to whom he soon became engaged. Unforeseen in our original plans, we would need to prepare for the lifestyle they would have together and for their respective grown children who sometimes visited.

Space was not a problem. With 4,500 square feet available, they had plenty of room; but still, we wanted space for each of them as individuals, with certain details personalized for each.

How they wanted to use their home was something we had to discover together. They planned to entertain a lot and also threw large dinner parties. After several meetings to also discuss the soon-to-be-wife’s desires for this new home, I realized that she had a different approach to the use of the space. She was willing to eliminate the sitting area and media room in order to create two extra bedrooms and needed a very large walk-in closet, too. They would do some formal entertaining, so she was not keen on the open kitchen; she suggested an eat-in kitchen and a formal dining room.

Designing a new layout was not a problem; we love challenges and that is when our creativity spikes. Yet I noticed that our original client began to be quieter during our meetings and I felt his sense of frustration.

We had to employ all of our abilities to make a cohesive design while making sure that the client received his beloved sitting area and the media room that he cared so much about. It was a little bit of a balancing act, requiring psychology and mind-reading in addition to design ability.

The apartment was completely gutted; it needed a lot of upgrades. We started with creating some statement pieces in the home, like a monumental fireplace that was the common denominator between the formal dining room and the large living area. Also, a functional wood lacquer wall/cabinet between the formal dining area and the kitchen that served as a china closet in the dining area and tall unit cabinetry on the kitchen side. Finally, a very modern spiral staircase connected the two floors.

These three elements were immediately approved by both of the clients, but other elements went through some phases of adjustment. We made sure to fulfill our original client’s wish to have a beautiful media room with a custom desk for his sporting entertainment, the sitting area, and that very cozy bar that was in his heart from day one. For that, he was very happy.

It occurred to me afterward that this entire story was kind of a romance for my client. First, in finding the right architect and then next, in finding his wife while at the same time receiving the results and attaining the comfortable and harmonious home he desired all along.